Stowmarket Town are through to the first qualifying round of the Emirates FA Cup for the first time since 2001, after beating higher-league Yaxley 2-1 yesterday.

Since reaching the third qualifying round in 2001-02, the Old Gold and Blacks have fallen in the preliminary round of the world famous cup competition in their last 12 appearances.

But goals from Craig Parker and Josh Mayhew proved to be the difference at a sunny The Decker Bus Stadium, as Stow followed up their 2-1 victory against Rothwell Corinthians last week with another win by the same scoreline.

Joe Butterworth grabbed a goal back for hosts Yaxley in the fifth minute of second half added time, to deny Stow a third consecutive clean sheet in all competitions, but Rick Andrews’ men held on to advance through the preliminary round.

Parker was one of two changes to the Stow line up from Tuesday’s stalemate at Norwich United, coming back into the side along with Seb Dunbar, while Mayhew dropped to the bench and Danny Cunningham sat out through injury. 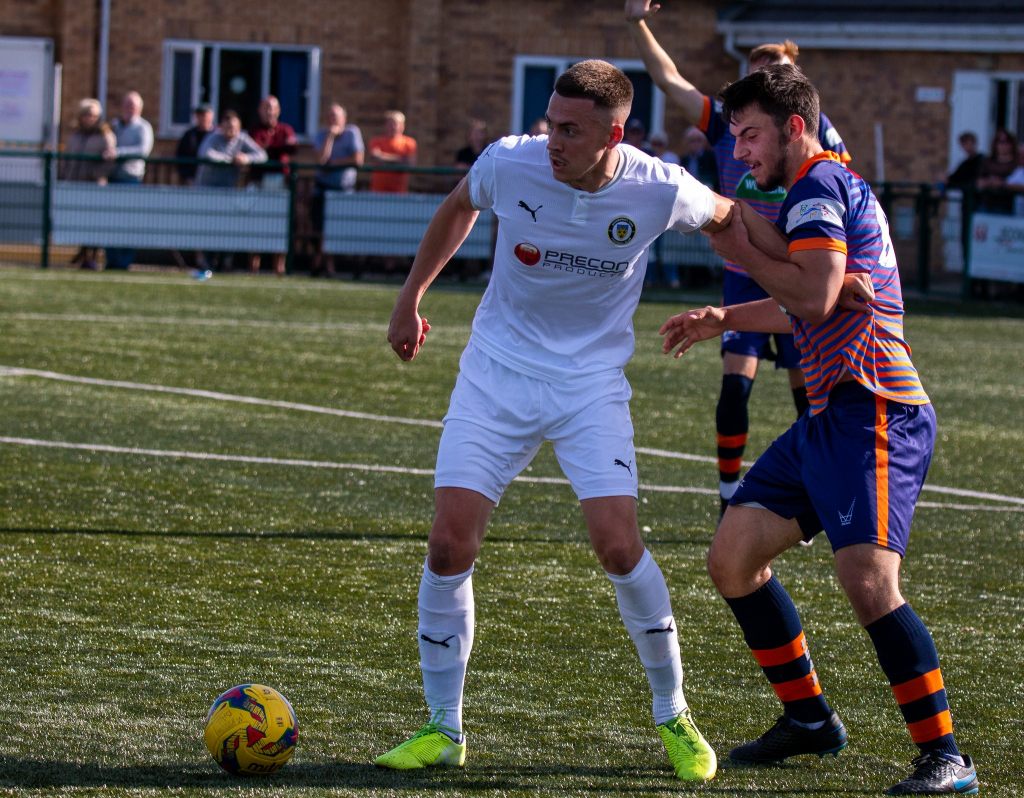 Yaxley sat in eighth place in the Southern League Division One Central table before last season was curtailed, and the Step 4 outfit were put immediately on the back foot when Parker opened the scoring for Stow after just four minutes.

Jamie Shaw’s ball into the box was cut out by the Yaxley defence, but only as far as Parker, who headed the ball down and quickly improvised to finish low past Aaron Butcher for his second goal in as many games.

It was a stop-start first half with several Yaxley players going in the book for late tackles, while Stow were forced into an early change when Shaw limped off on 34 minutes, to be replaced by Mayhew.

A lively start to the second half saw the visitors push for another goal to increase their advantage. Mayhew saw an effort blocked and Parker headed off target, before Stow were presented with an inviting chance to double their lead midway through the half.

Anton Clarke raced towards the byline and went down under substitute Kyle Nolan’s tackle, winning a penalty which Mayhew converted for his first goal of the season and 116th for the Old Gold and Blacks.

A late rally from Yaxley saw them twice strike the frame of the Stow goal, the second occasion including a fine save from James Bradbrook to push the strike onto the crossbar.

Stow boss Andrews handed minutes to two youngsters in the squad, as Alex Clarke came on for his second appearance for the first team, while there was also a debut for Charlie Lockwood for the last five minutes.

Deep into added time, Yaxley did get themselves on the scoresheet as Butterworth scrambled home from close range, but it would only be a consolation as Stow saw out the remaining seconds to progress into the next round.

Stow now turn their attention to last season’s Turners Hyundai Suffolk Premier Cup, as they take on Needham Market in their rearranged semi-final, at AFC Sudbury, on Tuesday night (7.45pm).